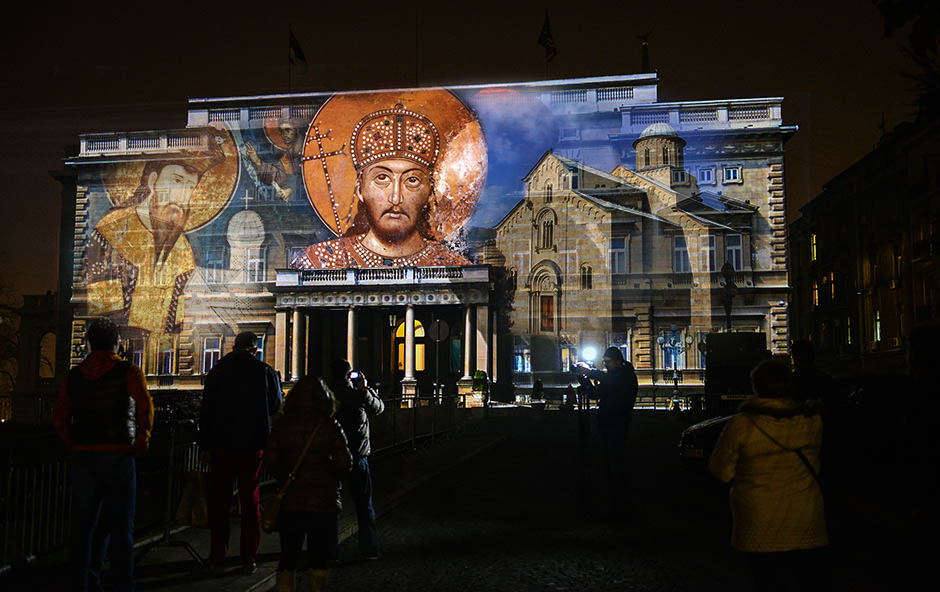 It is our great pleasure to inform you that on 26 and 27 December at 18.30h to 21.30h, on the City Hall façade a free screening “Serbian medieval art in Kosovo and Metohija” will be held as a 4D projection organized by the company for digital art OHillusions.

This three-day screening, as a part of our project “Kulturizacija”, is organized with the support of the Republic Institute for Protection of Monuments of Culture. The author of the project is Mr Dusan Jovovic, PhD.

During the year, from November 2015 to October 2016, through six premieres and thirty projections, the facade of the City Hall will be used as projection screen that will tell the story of Belgrade, Serbia, and the people who have left their mark in our own, and the history of the world, as well.

Through the images and quotes of people who indebted our society, shown in the first screening “Famous Belgraders”, we were reminded of some almost forgotten values ​​- OHillusions now wants to focus public attention on the importance of preserving the Serbian cultural heritage in Kosovo and Metohija.

As our contribution to global action NoKosovoUnesco, noting that the persistent struggle to protect our cultural heritage is yet to come, through the 4D video screenings we shall present our national treasures from Kosovo and Metohija – from fresco painting to the architecture of the monasteries and churches.

Please note that the project “Kulturizacija” is donated in its entirety by OHillusions to Belgrade and Belgraders.

We are deeply grateful for your help and confident that “Kulturizacija” our most important endeavor to date. We therefore urge you to support it, because all of us need to take a part in “Kulturizacija” to make it a success.

Sorry, the comment form is closed at this time.